Q: HOW LONG HAVE YOU BEEN INVOLVED IN PHOTOGRAPHY?

My passion for photography started at an early age. It was during an elective photography class in sixth grade when I saw my first print being developed in the darkroom that I immediately fell in love with it.

It was almost like it found me. The teacher was a friend of the family so I took his photography class. I didn’t enter the class thinking it would have a lasting impact on my life rather I just thought he was a cool person to hang out with.

Q: WERE YOU THAT KID WHO ALWAYS HAD A CAMERA WITH HIM WHEREVER HE WENT?

Yes. I had my 35mm film camera with me 24/7. I would always be seeing images and capturing them on film. Then running to the darkroom to process my film. After that it was about making the best print possible which turned into long hours in the darkroom. If I wasn’t creating something in photography then most likely I was on my dirt bike riding out in the fields.

Q: DO YOU STILL RIDE TODAY?

It’s kind of funny how things come full circle in life. I still love to ride and while I have dirt bikes, the most of my time is spent on a beautifully made bike that allows me to go on-road and off-road. It’s designed to by taken on long distance trips across the world and last year I rode a little over 3000 miles to the tip of Cape Breton in Canada. This year, I will be doubling my miles and going cross-country just wandering on back roads through the heartland of America until I hit the west coast. And yes, I’ll have my camera with me 24/7 and you will be seeing this guy in full motorcycle gear pulling over to take pictures of things he just can’t pass by.

Q: THAT SOUNDS LIKE A LOT OF FUN. WHAT WERE YOU DOING BEFORE YOU STARTED WILLOW STREET PICTURES?

I had been working all over the world on photo shoots for major corporate clients, magazines, and record labels. Most of my time was in NYC. However, on a moments notice clients would call me for an important project and I’d have to jump on a plane and fly to Europe for photo shoots. It was an amazing time of my life.

Q: IS THERE A PROJECT THAT STANDS OUT FOR YOU DURING THAT TIME?

I was working with a client whose focus was on mountain bikes. They contacted me for a project that took me into the remote areas of Madagascar. I would travel with a group of doctors on mountain bikes into villages far from any major city or roadway. I would be photographing the doctors was we rode our bikes through these remote areas as well as when we reached the villages. Everyone we met was very nice including the tribal chiefs who granted me permission to photograph his village.

Q: IT’S MUST HAVE BEEN A BIG CHANGE FOR YOU WHEN YOU OPENED A STUDIO AND GALLERY IN PENNSYLVANIA. WHY WOULD YOU LEAVE THAT TYPE OF FAST PACED GLOBE TROTTING LIFESTYLE?

Life has a way of sometimes throwing you an unexpected curve ball and it has a way of changing your perspective. I was confronted for the first time with a clear view of my mortality. I was only in my 30’s when I woke up on a Monday with extreme pain in my right leg and went right to the emergency room. I watched the nurse perform a test on my leg and could see first hand how the blood had stopped flowing in 2 places. I learned it was deep vein thrombosis and how serious it could be.

Yes, from that moment forward, my focus changed. My daughter was one year old and I wanted her to remember her dad should anything happen to me. I had not made a real effort to have a family portrait created before being hospitalized. And now I wanted one that would stand the test of time and would be proudly displayed honoring the family legacy. Up to that point, I thought I was as healthy as could be. I thought I’d live for a very long time as my grandfather lived to 92 yrs old. I gained a new perspective on life.

Q: WITH THIS NEW SENSE OF AWARENESS WHAT DID YOU DO?

First, I learned as much as I could about deep vein thrombosis (DVT). I had a laptop going during the several days that I stayed in the hospital. I was also searching for someone who could capture the personal connections that I had with my wife, child, and my pets.

Q: WHAT DID YOUR RESEARCH TURN UP?

That riding my motorcycle right now wasn’t an option. But seriously I learned blood clots required some strong meds that may help ease the problem. It was also possible the blood clotting could take a fast turn for the worst. When I talk about this time of my life I always recall the untimely death of NBC correspondent David Bloom in Iraq. He was a healthy guy that sadly came down with blood clots and was not able to pull through it.

As for the results on finding a photographer for a family portrait it turned up only posed images that were run of the mill. I started asking everyone that I knew for recommendations but could not find what I was looking for.

Q: SO THIS IS HOW WILLOW STREET PICTURES CAME ABOUT?

Yes. If I had not gone through that experience, I probably would not had started Willow Street Pictures. And I certainly would not put as much personal energy into each photo shoot.

Q: IT SOUNDS LIKE YOU TAKE EACH PHOTO SHOOT VERY PERSONALLY?

There is a connection that builds between my clients, myself, and our creative team. There is an understanding of why we are creating the portraits and the historical value they have. We invest a great deal of creative energy into preparing for the shoot.

And as you can imagine, each photo shoot has its own rhythm to it. Each family has its own story to tell. Each person or pet has his or her own unique personality and relationship with the others.
It might seem complex to understanding all the different relationships and connections while chaos seems to be taking place on a photo shoot but I am blessed with the gift to intuitively understanding it and have everything come together.
Q: THAT HAS TO BE CREATIVELY EXHAUSTING. HOW MANY PHOTO SHOOT DO YOU HAVE EACH WEEK?

I’ve learned to limit the number of photo shoots so I can maintain a high level of creative energy and still enjoy the process. If it just was about making a sale, you might ask why not just invest less creative energy and reduce your time on each project? My answer is to go to back to why I started Willow Street Pictures and why it plays an important role in both my life as well as our client’s legacy.

Q: WHAT TYPE OF PROJECTS DO YOU LIKE TO WORK ON?

I love collaborating with clients who want something that’s innovative, original, and who are expecting the best work. The images could range from an individual portrait in the studio to spending a day or more creating images with a family on location. The location could be anywhere.

Q: I SAW THAT YOU WERE FEATURED ON NBC, DISCOVERY HEALTH, TLC, AND HGTV. WHAT WAS THIS ALL ABOUT?

I thought after leaving NYC that type of stuff would fade away. But as it turns out, the major networks came to my studio in Pennsylvania and filmed some of my photo shoots to air on national television and it became a huge hit. It turns out our photo shoot made the top ten episodes for the show. We started receiving phone calls from all across America from viewers who now want to book photo shoots with us.

Q: WHAT CELEBRITIES HAVE YOU WORKED WITH ON A PHOTO SHOOT?

I spent over a decade in NYC in the photography industry and have photographed internationally recognized musicians, corporate moguls, and fashion icons. There was a photo shoot with Sir Richard Branson that I recall being a real challenge. I was shooting with a large format camera that required the person to sit still and he kept moving all over the place. And there was a photo shoot where I lit the band members of Queensryche with a flashlight. I was painting with light and creating something different for each frame. I’m not sure what I was thinking back then but it was a lot of fun.

I was an apprentice to several prominent photographers while I was a student at school in NYC and any given day I would be on set with celebrities. For Steve Jobs we flew out to his place in California and he was a pretty intense guy. It was quite an experience. After the photo shoot we jumped on a plane and did a red eye back to the east coast. I returned all the photo equipment back to the studio then I ran to school to make my morning class. It was some very long days but I learned so much!

Q: WHAT’S THE MOST EXCITING CHALLENGE FOR YOU AS AN ARTIST AND WHERE DO YOU SEE YOURSELF IN FIVE YEARS FROM NOW?

Q: WHAT’S SOMETHING COMPLETELY UNEXPECTED THAT PEOPLE MIGHT NOT KNOW ABOUT YOU THAT YOU’RE PROUD OF?

I was the middle school Ping-Pong champion. And I won the title while playing in a highly competitive playoff tournament in the gymnasium in front of the entire student body. I’m proud of this because Ping-Pong was very popular at the time and my dad was incredibly good at it. We played almost every night after school and he never just let me win against him. Rather each day and each month I kept improving my skills to the point where I finally was able to win a game. I’m not sure why this comes to mind but I love him for making me a better person and would give anything to play another game with him.

Q: HOW DO YOU FEEL ABOUT THE ROLE OF BEING THE FOUNDER AND HAVING REGINA BEHIND THE CAMERA?

For over the past three years I’ve mentored and worked side by side with Regina in all different types of locations. Those were some very long days with heavy demands placed on our shoulders to constantly create something new and amazing every day. We are very alike in our creative style and both of us are incredibly driven. 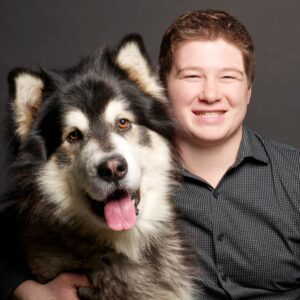 Hi, I'm John! I'd love to tell you all about the fun things here at the studio and what we've been up to lately.

Want to stay up to date on our latest projects and exclusive events?